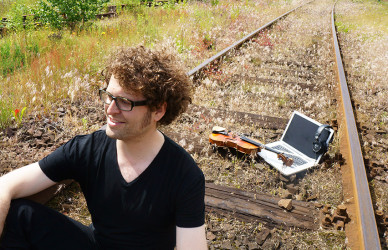 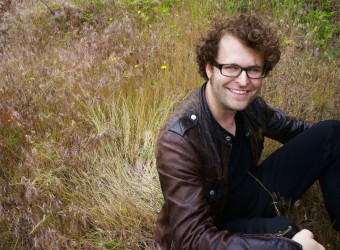 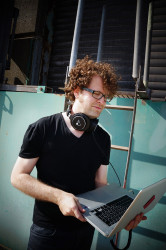 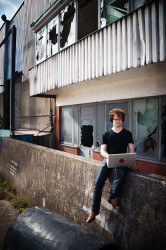 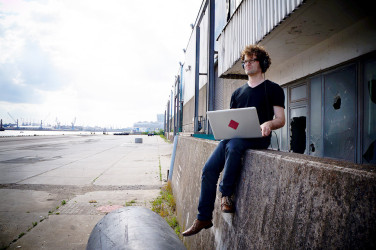 Employed as a software developer at e-instruments.com, he is contributing to great software instruments. As a lecturer at Musikhochschule Lübeck (University of Music Lübeck) he teaches students of composition on techniques of electronic music. He also works on independent projects such as the Max for Live device FlexGroove, which makes his personal research of recent years accessible to (almost) everyone and hopefully has an impact on the birth of new kinds of electronic music.

When he is on stage, he is interested in doing everything live. He usually doesn’t use many pre-recorded samples, he tries to record sounds on the fly – therefore he built himself various tools. In his solo performances (e.g. “violin sidetracks” SMC 2016, Hamburg and klingt gut festival 2017) he explores possibilities of interaction between man, instrument and computer, opening up new sound spaces. Thereby the computer becomes his second instrument, that is able to react even on external factors, such as body movement.

In pieces like marimba sidetracks (Greatest Hits festival, Hamburg, 2013) or kontra! sidetracks (Hamburg, 2016) the interactive live-electronics act as a kind of second player and therefore gain an important role in the composition.

Besides live-electronic and electronic works, Martin von Frantzius writes for acoustic instruments. His latest piece without electronics “unstillbar.1” for saxophone and organ was premiered in Switzerland in 2018. This is preceded by works like his music theatre Orangen (premiered 2008 in the course of Münchener Biennale) or his ensemble piece nowhere (premiered at festival Musica in Strasbourg, 2009).

In addition to composition and performance, interactive installations form a further part of his work. His installation, “Archives Vivantes” was created in 2012 for the exhibition “Archives – Un inventaire sans fin” on the occasion of the 50th anniversary of Goethe Institut Paris (also presented at “Nuit Blanche” 2012, Paris). It allows visitors to interact through movement with language, sound, light and video.

2011 Martin v. Frantzius spent half a year as a fellow of Hamburg Department of Culture and the federal government (BKM, Beauftragte für Kultur und Medien) at the Cité Internationale des Arts, Paris.

He first studied violin with Christiane Edinger at Musikhochschule Lübeck, before he began his studies in composition at Hochschule für Musik und Theater Hamburg with Peter Michael Hamel (acoustic composition) and Georg Hajdu (live electronics and multimedia). Further study visits took him to Prague and Lyon, where he worked with Marek Kopelent, Robert Pascal and Denis Lorrain.

All fotos on this website are taken by Namoo Kim, Hamburg (exception: fotos in “work/media” are private).